I was awake nice and early on the Tuesday morning to see that the weather threatened rain, which was great for the islanders and farmers. I was told that sometimes rain threatened, but was known to fall out at sea instead of over the land.

My host had a organised a driver to give a me a tour. We weren't able to go and see all the island so we agreed the route then we headed off towards the village of Morro. We stopped on the way to look at a hotel which had a number of vila type accommodation and a swimming pool, but it looked in some need of attention. On entering the hotel we took a quick look into the large dining area, where we saw just two guests sitting in the middle of the room having breakfast, the outside the complex looked deserted. This hotel was some distance out of the village, with building projects being built nearby so I was glad I had chosen to stay in Vila do Maio.

We travelled on to Morro, on arrival my host took me in to see Centro Ceramico, a small operation involving local people who made ceramics. Most of the people from this village worked with animals but two of the ladies were making some pots, examples of finished earth ware on the shelves. These women had been shown how to make the pots from clay and use the moulds and ovens to produce practical earth ware that could be sold. More training is required for these ladies who work with few materials and lack the design skills, but their finished items are a merit for people who've had little training. A modern oven stands unused in one corner of the room because something isn't working properly and there is no-one to fix it. They revert to the old methods using the oven in the back yard. I am amazed at what they have been able to produce. 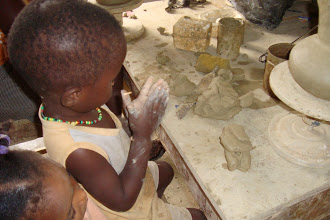 We travel out of the village with children and adults wishing us 'Bom Dia', something that we hear in all the other places we visited. All the villages were very poor, but they kept them clean. A number of main streets had a few fruit trees along the middle of the road, carefully watered and looked after as there weren't any visible outside the villages. Young and old people played local games or with toys under the shade of trees. 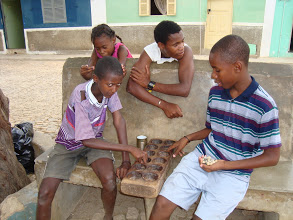 Many of the trees had been cut down along the sides of roads between villages, this I was told was to help drivers see animals on the roadside and slow down in case those animals walked into the road in front of vehicles.

Acacia trees were now farmed to supply wood to make furniture and for burning to provide carbon for BBQ's, this and salt being the main exports of the island. 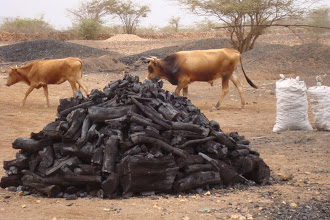 The absence of plastic bags hanging from bushes or branches was noticeable, as this is present on Sal, mainly in bushy areas when the wind blows them across the island. I was informed that the more mountainous areas on Maio now have walls across ribieira's, to help stop rainfall disappearing down the valleys so that it can be redirected to areas that need the water. Not that there is much rain, in some areas there hasn't been any rain for two years. Today it rained, I just hoped it reached the entire island.

Having travelled up through Calhetta and through Morrenho Zona and across to the Dunas it was very apparent that little had been able to be grown without regular rainfall. There were areas of multi coloured terrain of red, yellow, cream, brown, orange and black and a few pockets of oasis or small plantations of where crops were nurtured by locals in ribeira's. There were acres of acacia trees that were a white-silver colour, where rainfall had failed to reach the soil for a few years. There are goats, ducks, pigs, chickens, cows and a few other animals that roam around freely in and around villages, although I was told there are supposed to be restrictions with animals roaming the villages freely. 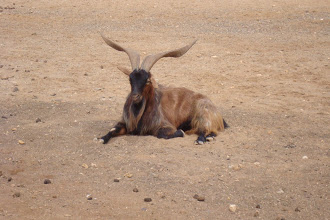 We decided to avoid the journey to Praia Santana up north as rainfall would have made the roads water logged.

Monte Penosa is over 400mtrs high, it attracts people who wish to walk on their own or on a tour. There are plans for a new tarmac road to be built between Cascabulhho and Pedra Vaz but for the time being it is a bumpy track. As we head towards Alcatraz and a brief stop at a small local bar we notice large stones painted white, usually a sign or plots of land either to be sold or already sold for development. From Alcatraz we take a new tarmac road to Figueira de Horta, the local villagers worked on this road and earned some money but now the road is finished there is not much work for them. 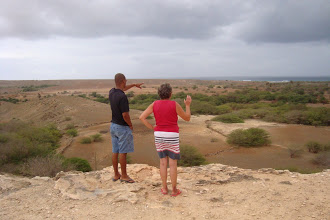 Further along the road we notice one or two solar panels, so locals have more equipment to help them farm the land. Tanks holding water have been installed and hose pipes extend to reach farmed ground. Some small areas of green identify the growth of sweet potatoes.

As there are very few vehicles on the island and no taxis, there is little traffic so we stop to pick up and drop off locals making their way on foot from one village to another. 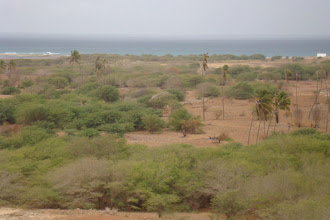 We managed to cover most of the places I wanted to go and see. I know that the island has 54kilometres of beach and rocky coastline and there is much more to see. Maybe next time I will get an opportunity to stay a bit longer and see other parts of the island.

The day was finished off walking around the village on my own and speaking to a few English speaking Europeans and stopping for a meal at Admiral Benbows, I must say that I was surprised that they served battered filleted fish with chips which was really enjoyable. A slow walk back to the pensao avoiding the puddles to join my host for a couple of red wines ended a hectic but enjoyable few days on Maio.

Having spent the weekend in Praia, Santiago, Maio was a completely different and more pleasant experience. The forgotten island won't be forgotten. I hope to have another opportunity to visit again, soon.

Maio will be an attraction for some who want to avoid the likes of Sal and Santiago, but as direct flights begin to reach Praia from other European countries I am sure that the simple life and island will attract many people as tourists or investors. It is likely that Maio will change for better and worse, but for now its one place I would look forward to returning to for a short break and to get away from it all. Thanks to the people who made my visit pleasurable and more informed than I was before.

Sept 2012 - I have not been fortunate enough to return to Maio but I am aware that some major developments will start being built on the island before 2020. I understand the Fast Ferry when it starts, will sail between Santiago and Maio a few times a week.......... if all goes well!

We provide marriage blessing ceremonies on the island of Sal, Cape Verde